Beatrice and Bopeechee Springs, both on Finniss Springs, were subject to a burning trial in May 2016, a joint exercise involving the Arabana, FOMS and Department for Environment and Water. The primary intention was to assess the effects of fire on the dense reeds (Phragmites) at Bopeechee and bulrushes (Typha) at Beatrice. Both springs were inspected by FOMS volunteers and the Arabana Ranger group in early June and late August 2020.

At Beatrice Spring, burning was only partially effective because of the high moisture content of the vegetation. There is now a healthy stand of Typha at Beatrice but horses have had a severe impact upon the other wetland vegetation. At Bopeechee Spring, the May 2016 burn was very effective in reducing the reeds to water/ ground level. Observations soon after May 2016 showed that the reeds were regrowing quite prolifically but subsequently horses had a severe impact, grazing and pugging the reed regrowth. These impacts have effectively negated the value of the burning trial but regular observations at the springs have continued.

By August 2020 the intensity of horse activity at Bopeechee and Beatrice appeared to have diminished – probably associated with recent rains. It is interesting to note that it is the bore-drain sedge, Cyperus laevigatus, which is now colonising much of the wetland area, with reed (Phragmites) regrowth much reduced. At other springs with Phragmites protected after decades of stock pressure, proliferation of Phragmites has been the main response. While more information is needed, there is a suggestion at Bopeechee that C. laevigatus might have a role as a primary coloniser after stock / horse pressure is reduced.

FOMS and the Arabana Ranger team have discussed management options. An initial suggestion for management of the horse impacts was to install individual fencing around Beatrice Spring and Bopeechee Spring but current thinking favours fencing of a considerably larger area, coupled with measures to exclude horses. 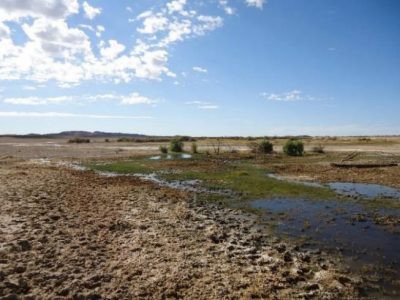