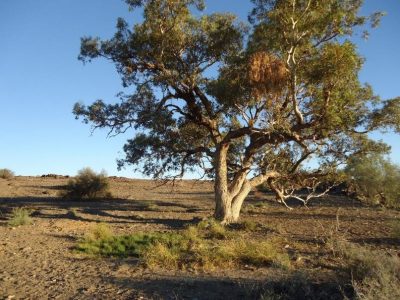 Regular readers of the FOMS newsletter may recall that the fencing of ten springs at Levi Springs, on the Peake Pastoral Lease, has been under discussion for several years. It is pleasing to report that this fencing has now been completed through the efforts of nine FOMS volunteers, the work being undertaken in July 2019.

Levi Springs comprise an important group of springs adjacent to impressive rock outcrops with petroglyphs. The area to be fenced also includes the remnants of a shepherd’s hut and coolabah yards – rare surviving relics of early pastoral times when sheep were being run on the country.

This project has had a long gestation period. As part of the State Environment Department’s $1 million Desert Jewels project (2013 to 2016), it was proposed that a number of springs at Levi Springs be fenced to provide protection from stock. In August 2015, a combined group from FOMS and the Department inspected Levi Springs and plotted a proposed fence alignment that would include all but one of the springs at Levi and most of the associated stony outcrops. Subsequently, the proposal was considered by the Directors’ Group of the Arabana Aboriginal Corporation and, after considerable deliberation, a more modest fencing alignment, taking in the springs but not the main associated stony outcrops, was given formal endorsement by the Arabana Directors’ Group. The project was also endorsed by the then lessees of the Peake, S Kidman & Co.

However, the Environment Department’s Desert Jewels project concluded without any fencing work at Levi Springs. The Department had purchased some of the fencing materials needed but did not have the resources to undertake the on-ground work. At about that time, S. Kidman & Co sold the Anna Creek and Peake Pastoral Leases to the Williams Cattle Company.

With the Department’s reduced scope for involvement, it was left to FOMS volunteers to continue efforts to see this fencing project through to fruition. In August 2017, FOMS members met with Tony and Trevor Williams, of the Williams Cattle Company, at Levi Springs and subsequently the Company advised that the fencing could proceed as planned.

The logistics involved in preparing for up to 2.5km of fencing to be erected by volunteers in a remote environment are complex and many months were taken up in finalising the fence design, reviewing equipment requirements, ordering additional materials needed and arranging for transport of materials to Levi Springs. Earlier plans for a timber post, four-barb fence were superseded by an all- steel design, still four-barb, fence that would require far fewer post-holes to be dug. FOMS member Brenton Arnold led the way with this work and FOMS is extremely grateful for his contribution.

By mid-2019, the final arrangements for the fencing settled into place. The fencing team was finalised and dates were set for the work: 16th to 26th July 2019. The team comprised Brenton Arnold, Bruce Gotch, Bren Lay, Chris Wenham, Steve Taylor, Colin Harris and Simon Lewis. Simon Rathbone was a last- minute withdrawal due to illness.

Because of the scale of the project, it was decided early in the planning process that a catering team should be engaged to look after food preparation and general camp maintenance. Experienced tour guide / caterer and fellow FOMS member Rick Moore took on this role, ably assisted by another FOMS member Stafford Dow.

All group members except Brenton travelled to Woomera on Tuesday 16th July, then continued on to Levi Springs on Wednesday 17th, via Billa Kalina and William Creek. The camp for the following eight nights was set up on Levi Creek, a coolabah / red gum creek-line close to Levi Springs. In the meantime, Brenton assisted with the loading of fencing materials at Port Augusta by McArdles Transport before joining the group at Levi.

Early on Thursday 18th, Colin and Simon drove the 35km to the Peake homestead to rendezvous with the McArdles truck and to guide the truck down to Levi Springs. The truck arrived on schedule at the homestead at about 9am and all were very relieved when the truck made it all the way to the springs. With enthusiastic assistance from truck-driver James, unloading was readily completed and the stage was set for ground-work to commence.

The fencing gear arrives at Levi 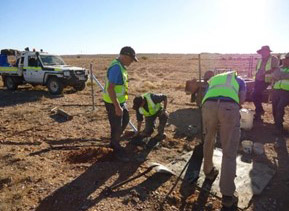 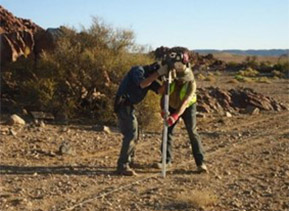 Brenton and Chris ramming in a star dropper 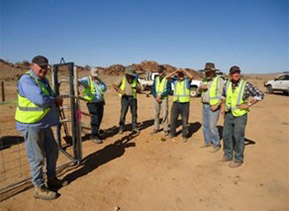 Job done, Bruce about to cut the ribbon

Relaxing after an evening meal

The first task was to confirm the fence alignment and some modifications were made to avoid saltier ground, rationalise drainage line crossings and include the coolabah spring near the rock outcrops. Then the physical fencing work commenced and over the next six days the crew slipped into a regime of post-hole digging, strainer assembly, star- dropper ramming, barbed wired run-out and straining and spacer installation.

By Wednesday 24th, all but a short run of fencing near the main spring and some fine-tuning of drainage line crossings were complete. This work was readily completed, whereupon there was an official gate-opening ceremony followed by a walk through the newly created exclosure. As part of this walk-through, Brendan and Simon established a number of photo-points to be used in following the progress of the springs and some dryland areas.

On Thursday 25th the group headed back to the Eldo at Woomera via William Creek and Billa Kalina. A flat tyre on Stafford’s vehicle was the only mishap on the journey. Lengthy showers and a celebratory meal at the Eldo were enjoyed by all.

Many thanks to all for making up a very convivial group and for completing a major project safely and enjoyably. A complete team effort, fine catering and an achievement FOMS can be proud of!

FOMS is particularly grateful to the SA Arid Lands Natural Resources Management (NRM) Board and the Friends of Private Bushland for providing funds to support this project. The NRM Board has provided FOMS with a $10,000 grant to support spring protection works and vegetation monitoring and $5,000 of this grant was used as a contribution to the Levi Springs fencing work. The Friends of Private Bushland provided a very generous grant of $2,000 and this was fully allocated to this project.

At the Peake OT site, indiscriminate access by vehicles to both the historic site and nearby creek- line was a significant problem until 2008 when FOMS volunteers installed timber bollards to define the carpark and limit vehicle movement. This work was subsequently reinforced through additional fencing installed as a cooperative venture by FOMS, the Environment Department and then lessees S Kidman & Co.