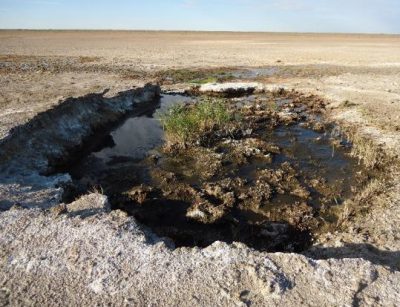 Wabma Kadarbu Mound Springs Conservation Park is best known for Blanche Cup and the Bubbler, the two mound springs with easy visitor access, parking facilities, interpretive information and boardwalks. However, tucked away to the south and north of these springs is an extensive array of springs not readily accessible to the public. In the south of the park are Horse Springs and Buttercup Spring and FOMS inspected these springs during the June 2017 introductory trip described elsewhere in this newsletter.

During this inspection, FOMS members were concerned to note cattle actively grazing on Buttercup Spring. Likewise, at Horse Springs there has been substantial and recent cattle damage (see photo). It is clear that cattle have intruded into the Park from the adjoining Stuart Creek pastoral lease FOMS members noted similar damage during a visit in August 2016.